At the International Spa Show,  as the Hydropeptide esthetician worked the magic serum into my complexion, she told me about her experience flying Alaska Air directly to Havana, Cuba from LAX with her Cuban-American husband.

They found a flight from LAX, direct to Havana for less than $400. The flight was pleasant and rather quick. But perhaps you want to ease yourself into the Cuban climate and culture for a few days before your early morning, 40-minute flight to Cuba.

Until January of 2017, we only had Charter airlines that flew out of Florida.  On my first trip to Cuba, I started with a few days in Miami for my “People to People” experience.

The last time I was in Miami was the late 60’s when I stayed at the Fountainblu Hotel. I was 19 and remember sharing an evening elevator with Mohammed Ali. Him, and his two giant white dogs, who had just finished a run.  Ali was young, strong, sweaty, and just as beautiful in person.  We admired each other for a few mellow minutes.  Obviously, I knew who he was.  Who didn’t?  By this time, he had become our U.S. GOLD Olympic hero, Heavyweight Champion of the World, a Muslim, and a Draft Dodger.  I was probably wearing, hot pants and go-go boots.  Those were the days… I had great legs…Today, I’m in my 60’s and preferred to ease into my journey to Cuba, and the climate.My original plans included renting a car at the airport, but I was late in renewing my driver’s license. Since I was on my own, and couldn’t rent a car without a valid driver’s license, my options included the convenience of a central location, shuttles, and public transportation. 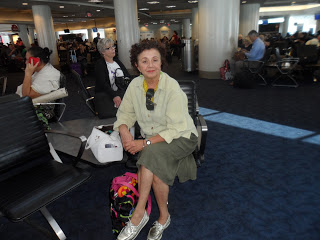 Spent a few days in South Beach, at the Chelsea Hotel, a moderately priced, funky, boutique hotel that runs parallel to the strip and offers a FREE Airport Shuttle. 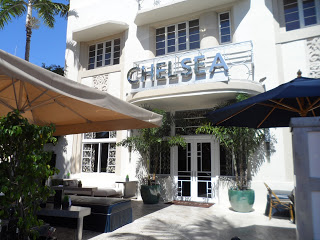 Once settled, I made my way towards the famous strip hotels on the beach.
Traffic jams at night and astronomical, 24-hour parking fees, made me a real
happy walker. In the morning, I walked past the Versace Mansion and the FRITZ Hotel. 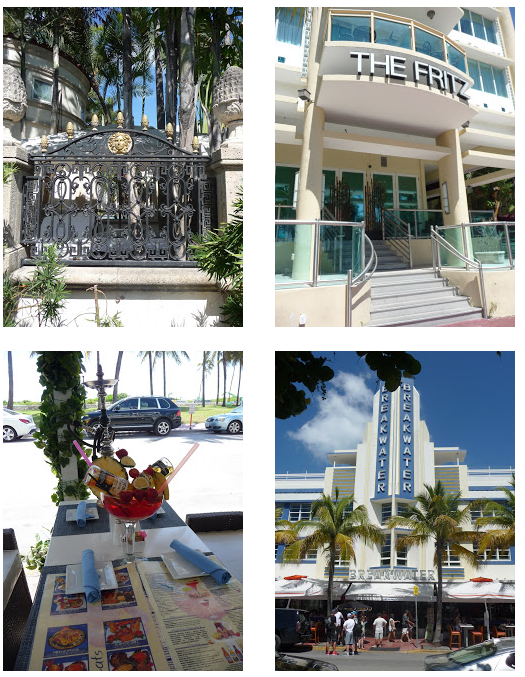 They were big on drinks and hawking breakfast as I walked past the famous Breakwater Hotel on the Art Deco Beachfront. I had an early morning mission of wandering South Beach with sand in my shoes and dipping my toes in the Atlantic Ocean – before lunch or happy hour – whichever came first. 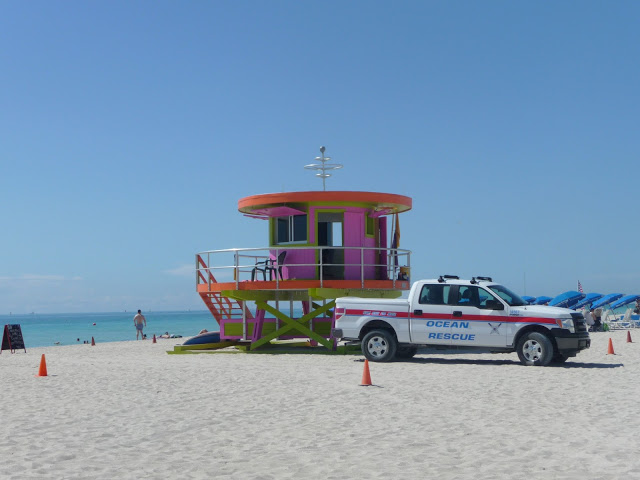 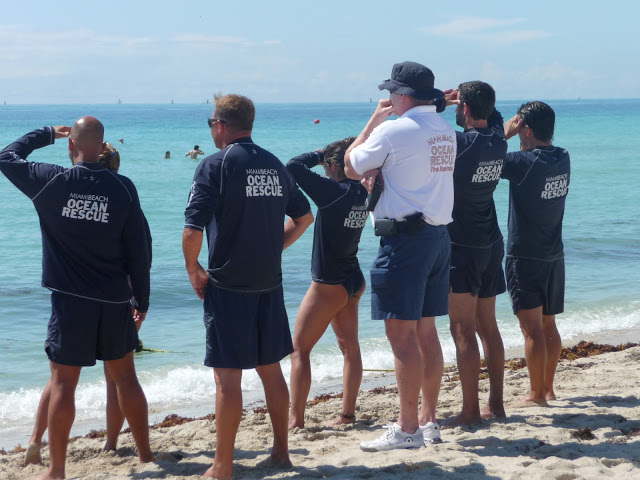 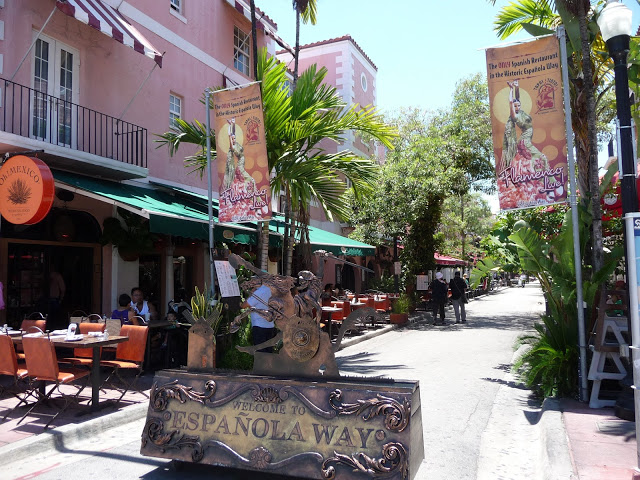 I was soon very happy watching people go by during an early Happy Hour at the Young.Urban.Cuban.American – YUCA.com restaurant in the Espanola District. 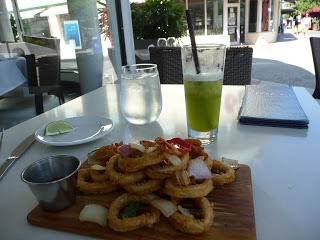 Really enjoyed these juicy, garlicky-onion rings and my first Mojito-ever! 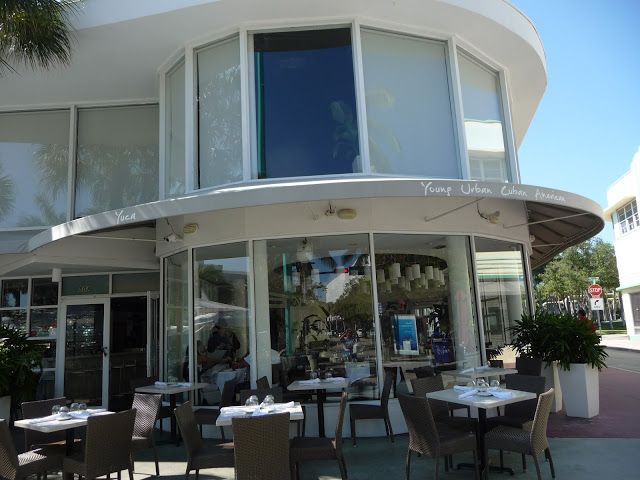 Lots of expensive tours abound; average prices about $60. for 2 days, and I’ve only got one. Delighted to find the Pirate Duck Tour (for half price and twice the fun) – http;//www.miamipirateducktours.com
The Pirate-Duck toured around town, then made it onto the water for a tour of the mansions on the private, posh waterways of Miami’s Rich and Famous. 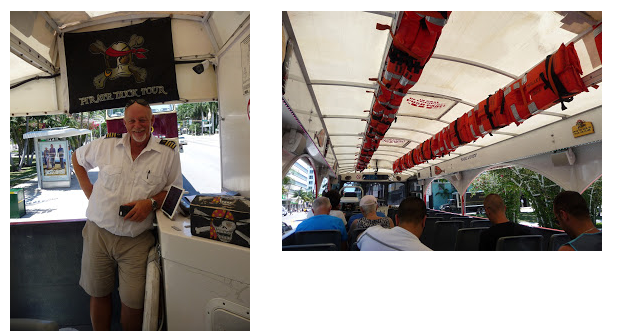 A fun captain, a creative crew of pirates and a great amphibian – ingredients for a fun experience on land and at sea. Thanks! 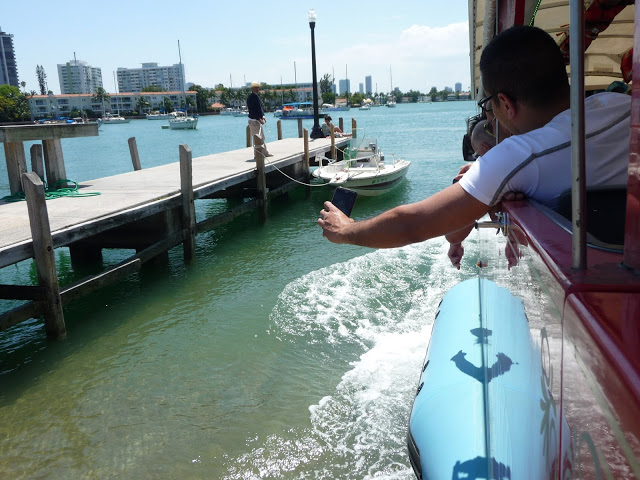 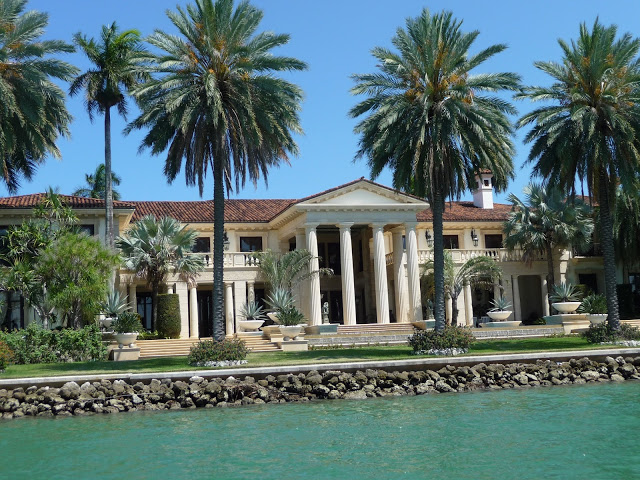 Back at the Chelsea,

I learned about tomorrow’s complimentary Happy Hour for guests. I picked up a bus schedule for tomorrow’s lunch in Li’l Havana, and confirmed my trip to the airport. 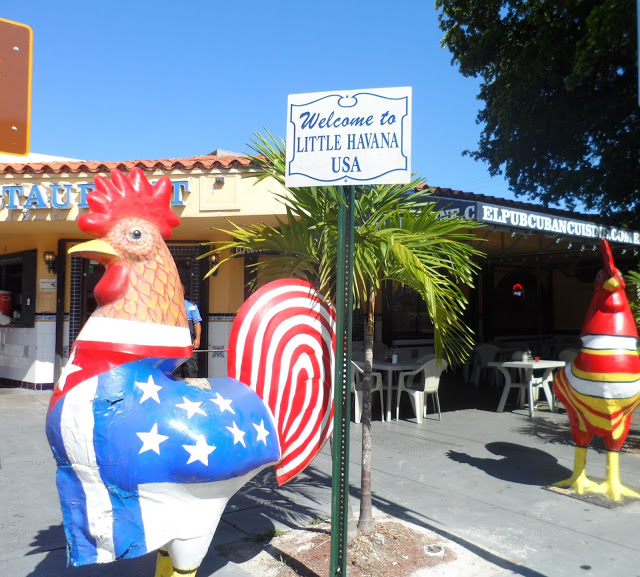 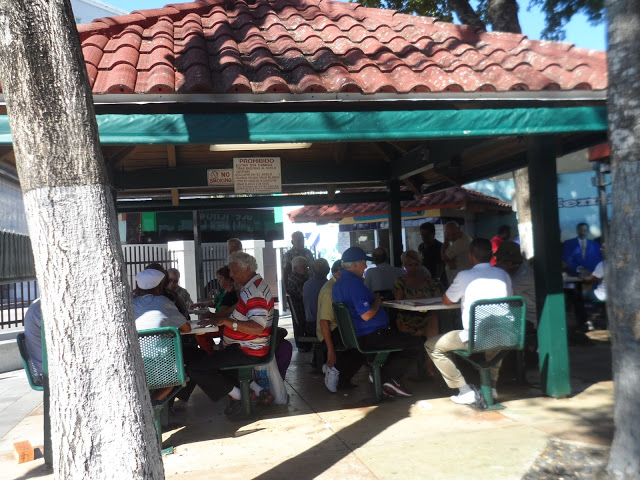 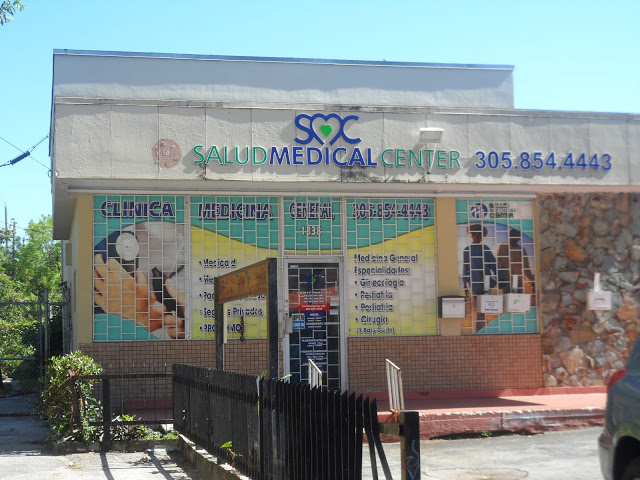 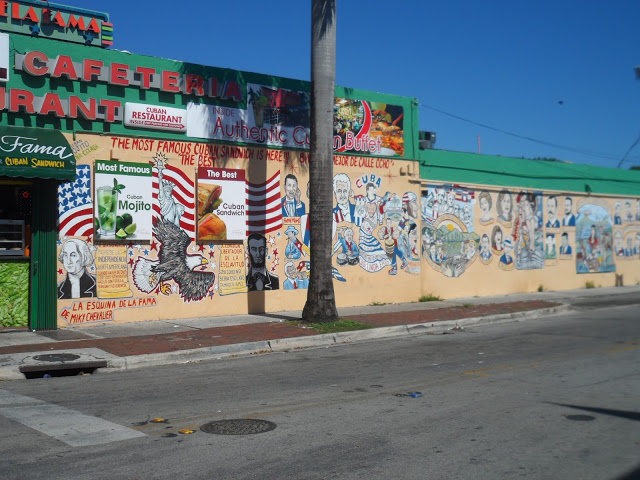 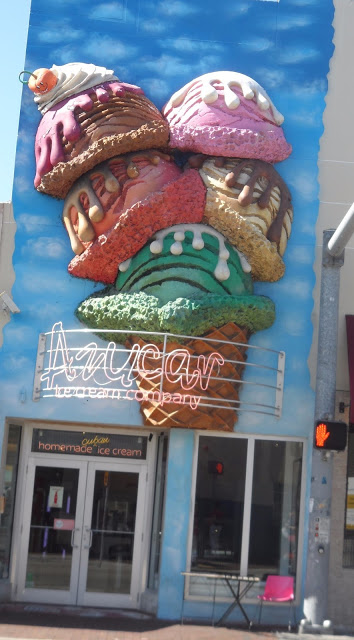 There were so many choices for Cuban food in Lil’ Habana, ice cream shops and restaurants were calling out to me.  I stopped in a local liquor/variety store and asked where they eat. They all pointed to a large grocery store across the street, where I enjoyed one of the best lunches, ever. 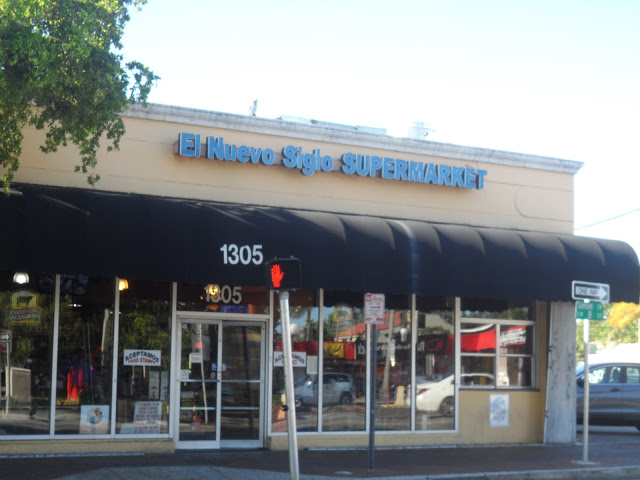 Made my way to the food bar and requested a traditional Cuban meal. Admitting I didn’t know a thing about Cuban cuisine and assuring the waitress that I ate pork, I left it in her hands, as I enjoyed the view. 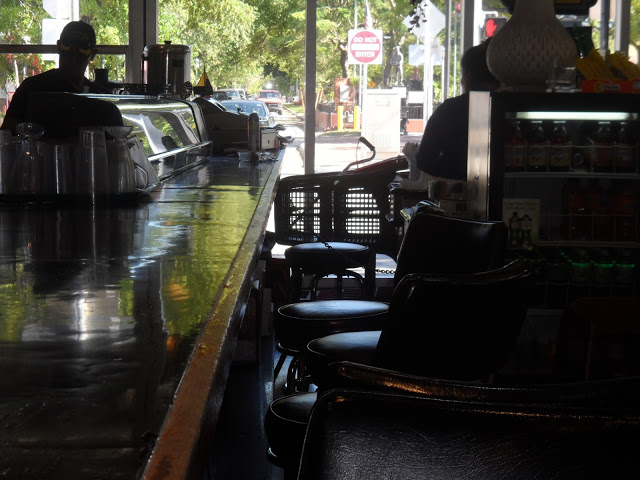 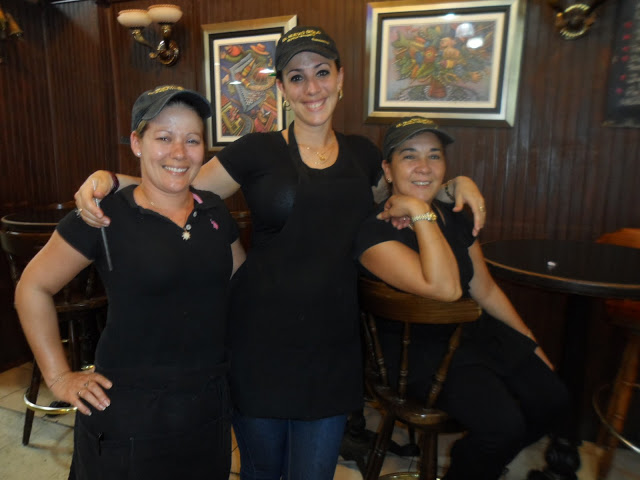 Ordered a Cuban beer while waiting for this onion smothered chop cooked to perfection. 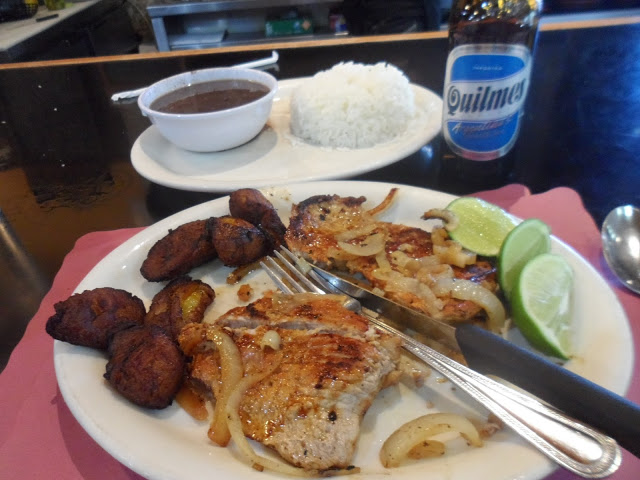 Once she heard I was on my way to Cuba for the “first time,” the sisters-in-law joined in on the conversation and it became the warmest, and most entertaining company at any food bar at a grocery store, ever.  In true Cuban fashion, we hugged and kissed out the door. They worried about me taking the bus back to the hotel after dark but they knew I would be safe in their country and have a great time.  They were so right.