Some people I know recently went to TJ, to see Dr. Carolina and TJ Smile. The procedure went very well, which was a relief to me as well as the patient, as I’ve only heard positive feedback about Dr. Carolina.

However, as the border crossing area was still under construction, the entrance that Dr. Kim and I used last year was closed this time. We crossed the Trolly tracks to the Jack-in-the-Box side and walked in and out on that side. Not sure if it will move any faster with a wall but hope it’s as pretty as it was, and not too scary when finished.

If you insist on driving across, here’s what I know…knew, but things change:

As a Medical Tourism patient, if you chose to drive across borders, you should receive a border pass from your medical provider, that I’ve seen puts you in a special lane that supposed to take less than 15 minutes to get back across, rather than the hours that I’ve reported in the past. I’d say that might be true during the week, but not on Saturdays. The last time I was there on a Saturday, nothing was moving.

Since I don’t know where I’m going or the rules of the road in Mexico, right now, I prefer to pay $5.00 for parking at the border and $5.00 for a Taxi Libre, to the dentist or medical practitioner. The passport line moved pretty quickly, considering the number of people who cross the border twice a day for business.

Here are a few photos of the tracks we made after crossing the border back into the U.S. See that brown building back there? That’s the border building. 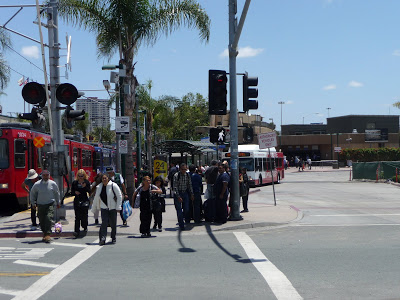 As you can see, right out front, there are plenty of buses to go somewhere in San Ysidro, and if you know where you’re headed, be my guest. It’s just a couple of dollars. 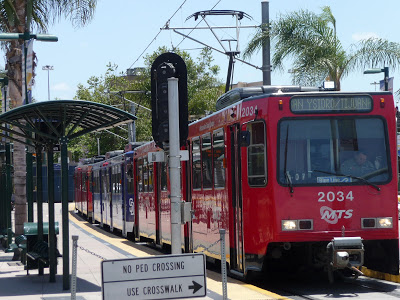 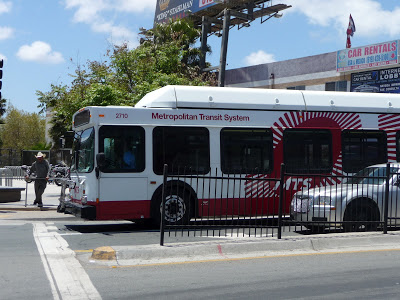 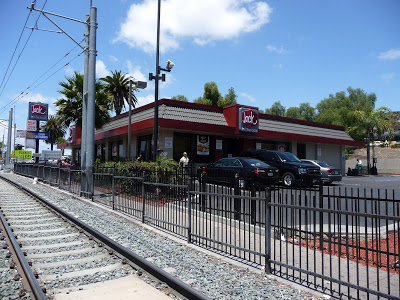 Another option is to drive to San Diego and hop on the convenient Tijuana Trolly for a few dollars, which is located within a few feet of the border building. That way, if you’ve decided to stay the night in San Diego and cross over again, it’s really convenient.  https://www.sdmts.com/schedules-real-time-maps-and-routes/trolley

My patient and I walked slowly, (he’s got knee problems) to the “Jack in the Box” less than a quarter of a block away, where he waited for me to pick him up, while I continued over the bridge, back to the lot to get the car. Total time about 15 minutes.

Now you might wonder why I didn’t just park the car closer to the Jack in the Box in the first place. Well, as you can see those lots aren’t quite as nice, and they fill up fast.

Besides, the other side of the bridge is nicer and just a block away from high-end, Las Americas Premium Outlet Mall.

As a matter of fact, if you bring shoppers with you that aren’t interested in Tijuana, they can spend the day at the mall.