The Roman Baths have fascinated me since 1980, the very first time I visited England and Wales. The reconstruction started around then and lasted for many years, meaning a good number of visits stepping around ancient debris. 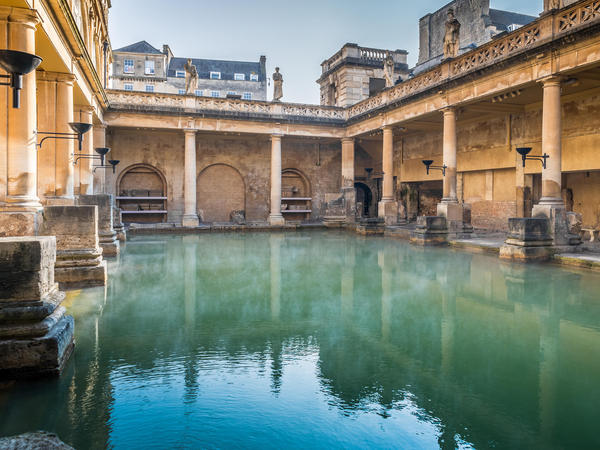 In 2012, Bath celebrated the grand re-opening and I finally soaked in Roman Bath’s legendary mineral waters. For more: https://www.romanbaths.co.uk/walkthroughs/sacred-spring-and-associated-objects

I haven’t traveled all over England since my first visit in 1980, but I have been visiting regularly. The Pump Room is legendary for tea, and this river bend is one of my favorite places on earth, Bath, England 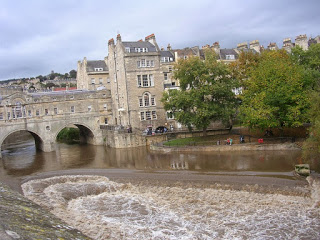 At one time, water was an essential component of human health care, as evidenced by the “Water” hospital founded in 1738. The Mineral Water Hospital.[3] provided care for the impoverished sick who were attracted to Bath because of the supposed healing properties of the mineral water from the spa.

We hardly had time to notice the latest holiday fashions in the windows, but we did stop to visit a health store on our way to Bath’s Newest Museum of Fashion… 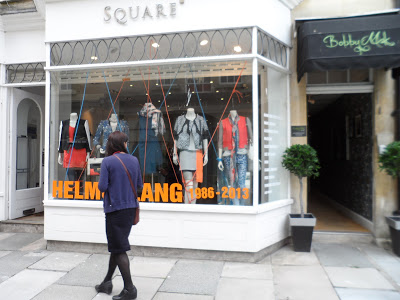 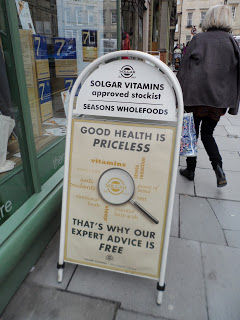 The Bath Fashion Museum – an elegant, assorted look back at fashion through the ages – housed in the Assembly Rooms in Bath, Somerset, England. 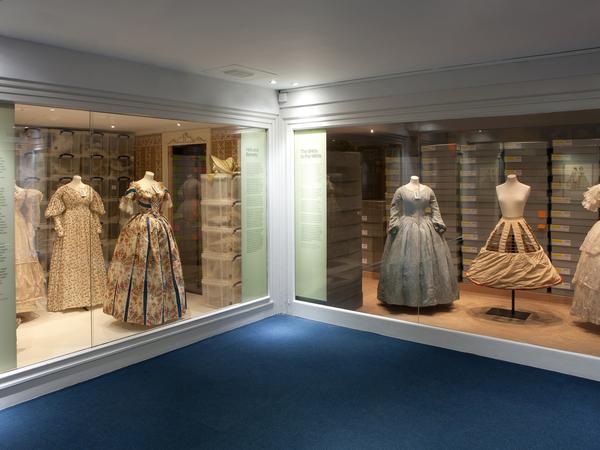 The Museum was inspired by Doris Langley Moore, who gave her collection to the city of Bath in 1963. 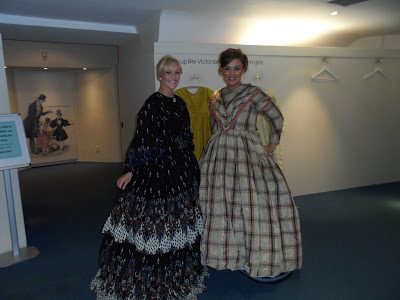 There’s an area where you can try the clothes on, to get a feel of the fabrics. 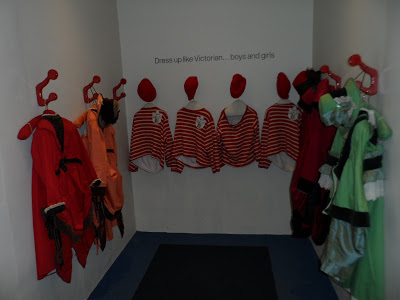 Children’s fashion of the era are also available for a user-friendly close-up look and fitting.

Tenby – A historically favored spot for pirate caves and kings with castles out to sea.

Someone (online) recently claimed Tenby was, “One of the most beautiful towns in the world.”  To my delight, once I mentioned this notion to my English/Welsh cousins, we were soon packing up the car and on our way to for an overnight stay in Tenby.

It was wonderful to spend a few hours looking at English scenery out the window of my cousin’s zippy car while he maneuvered his way around highway traffic and country roads.  I needed a pool fix and my cousins like to dine so the Atlantic Hotel in Tenby was a great choice.  The indoor pool area had a nice, big jacuzzi and stars in the steam room. Really a memorable experience itself. The food, the service, everything was outstanding.

I had no idea Tenby was once, “the” place for wellness, for the well-heeled. Those who could afford to, traveled here to breathe in the mist of fresh sea air and soak in the North Sea’s salt water. The rest of Britain’s population was steadily developing black lung disease – asphyxiated by the coal they used to heat their damp houses. 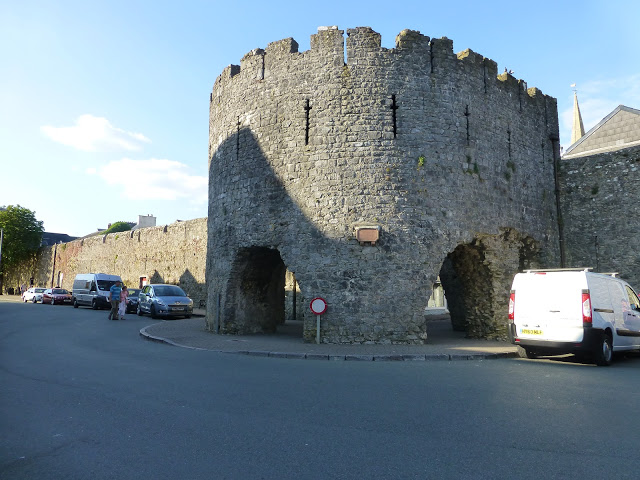 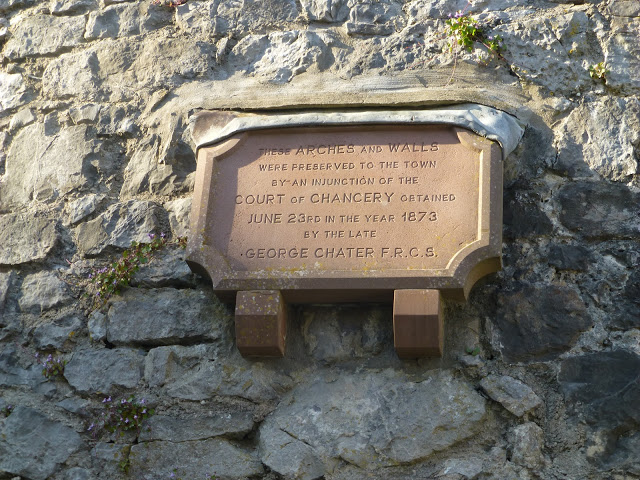 Tenby was a hilltop settlement point, with a written history that goes back to the 9th century when traders sailed along the coast to Bristol and Ireland and further afield to France, Spain, and Portugal. Exports included wool, skins, canvas, coal, iron, and oil; while in 1566 Portuguese seamen landed the first oranges in Wales.[4]

It was during this period that the town was so busy and important, it was considered to be a national port.

During the Wars of the Roses, Henry Tudor, the future King Henry VII of England, sheltered at Tenby, before sailing into exile in 1471. Cromwell and politics were involved in its official downfall and then in 1650, a plague outbreak killed half of the town’s remaining population. With limited infrastructure, resources and people, the town’s economy fell into decline.

By the end of the 18th century, John Wesley noted during his visit how: “Two-thirds of the old town is in ruins or has entirely vanished. Pigs roam among the abandoned houses and Tenby presents a dismal spectacle.”[5]

The castle’s way out there … 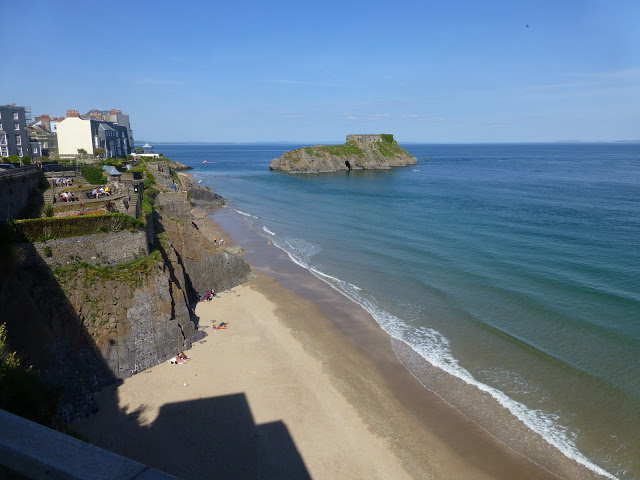 And the beach has lots of delightful, cooling caves where pirates, royalty, and society rested. 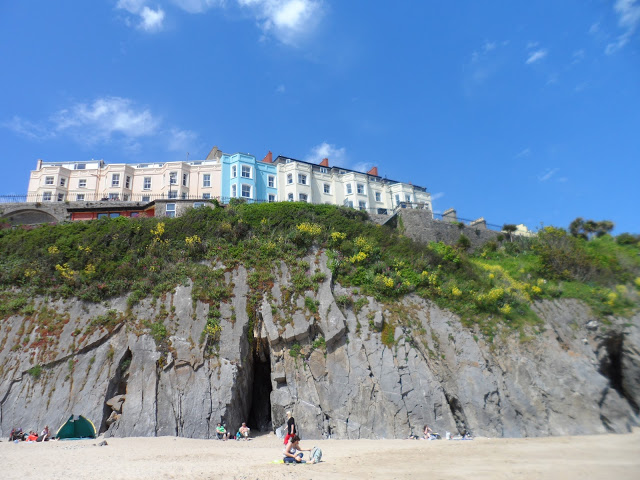 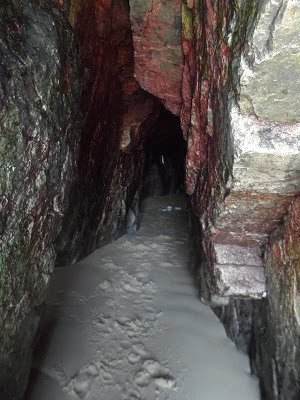 Connected by rail from Cardiff, today’s Tenby is a coveted retirement village. In a naturally sheltered harbor, with North Sea air and two and a half miles of sandy beaches, it looks like a movie set. 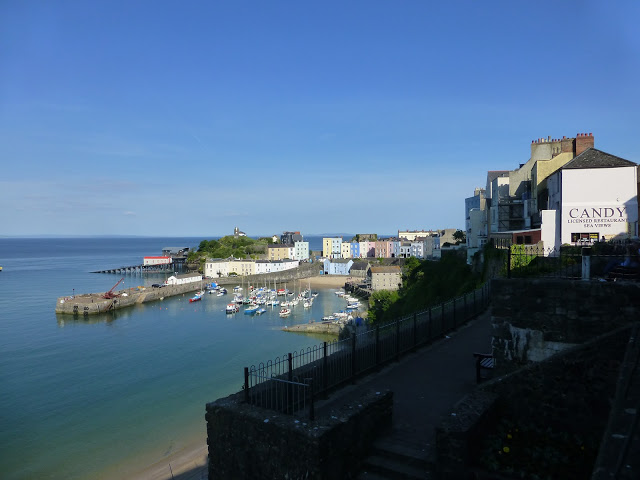 Tenby’s Museum claims to be the oldest Independent Museum in Wales, and worth a visit. The rooms are filled with historically informative stuff, including multi-media and a separate, impressive art gallery. 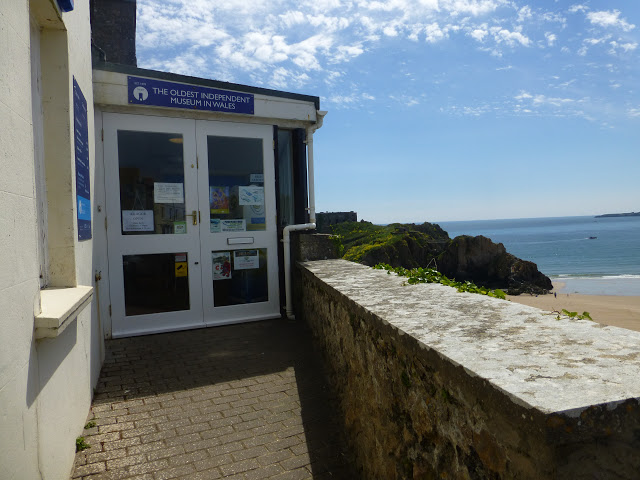 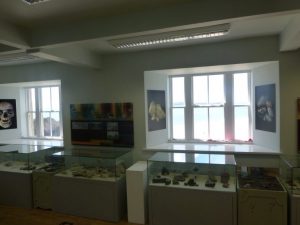 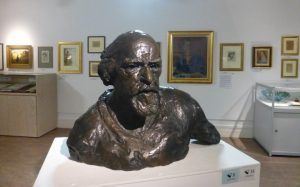 Turns out Tenby is an early Medical Tourism Hub. A fact for my up and coming, e-book, “Cathedrals of the Flesh”. During my walk to the Museum, I unexpectedly came across a historical plaque, dedicating Sir William Paxton’s building of the Sea Water Baths & “Assembly Rooms” in 1811. 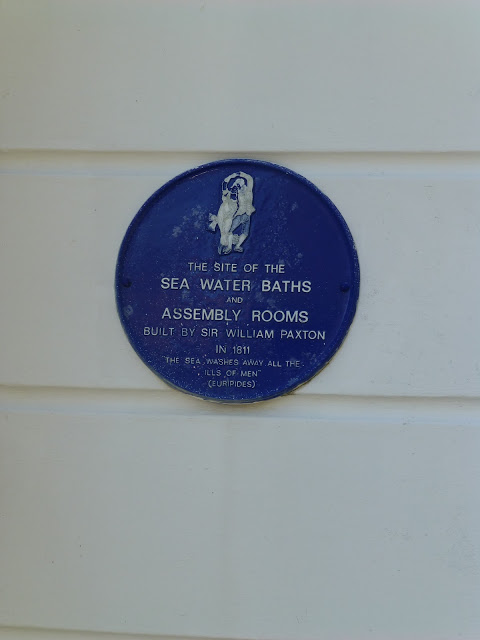 If I had a better photo of this glass-enclosed, model-sized bathing Cabin, you could see benches inside and the drop bottom, where ladies would drop down for a dip into the sea.  Certainly not naked! Certainly, they were wearing a suitable swimming costume of the day, (background). 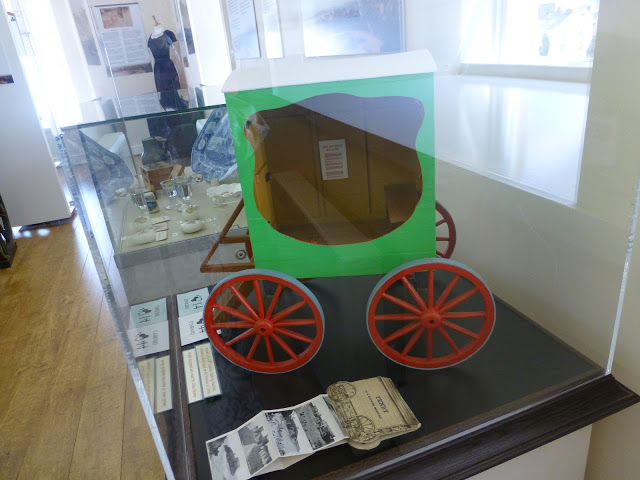 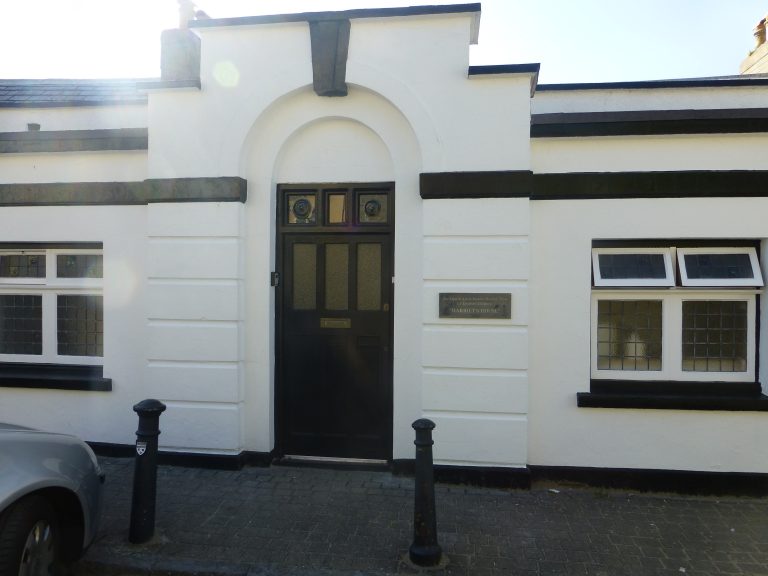 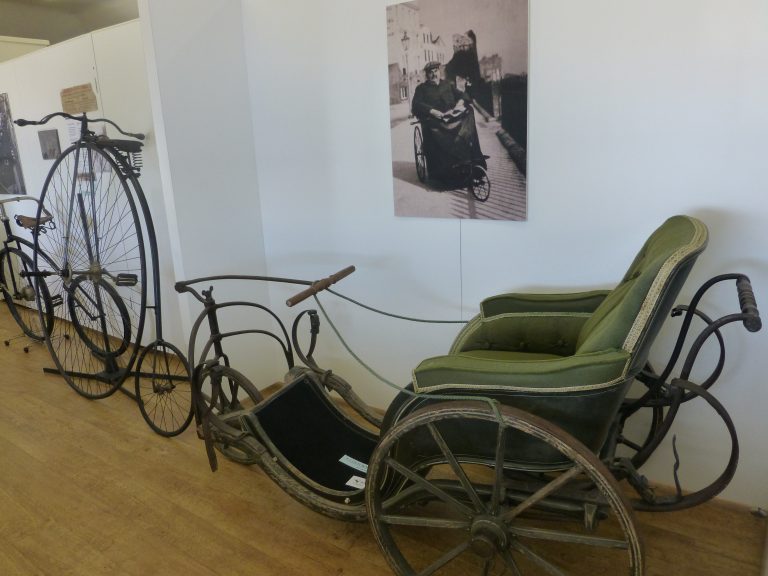 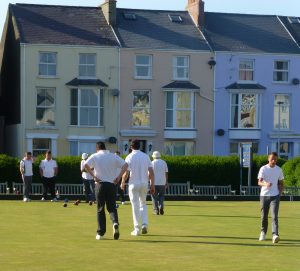 Lawn Bowling, after breakfast a the Atlantic Hotel, before heading back to Chepstow, Wales. 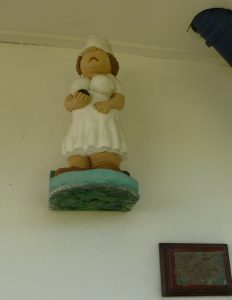